The most action packed and professionally run event I attended this year was Bridge of the Gods. It was a huge breakthrough event for me finishing 4th in the strapless division (so close), and participating in the carnage of the legendary 17-mile Blowout downwinder. It was 30+ knots in Stevenson on the day of the Blowout and 200 kites were on the water. Being my first time racing the Blowout with a kite, I went conservative on my kite size and chose a 10m. Next year I will be bringing a 15m, because if you want to win, you should be spending more time flying severally feet above the water, rather than being in contact with the surface.

In early fall, I took a trip to visit relatives in Newfoundland. I wasn’t sure what to expect in terms of conditions, as there is next to nothing about kitesurfing or surfing in Newfoundland anywhere on the internet. I threw in a couple kites and boards anyways because after all, it is a giant rock in the middle of the Atlantic. Too sum it all up, 30 knots is considered a “calm day” to a Newfoundlander. I was there for two weeks and every day was kite-able, except for the days there was too much wind. Not to mention some of the deserted surf breaks I discovered…so much untapped potential!   (Unfortunately do not have any photos magazine worthy from this trip!)

Last year I had several amazing sessions, from riding in Hawaii to the Gorge, but a mysto reef break on Vancouver Island was the best. The spot is difficult to get to, it only works on certain swell directions, and often the wind is very light. After several trips to the spot with only marginal conditions on offer, I lucked out on May 8th and had the spot all to myself. It was 20-25 knots with some of the cleanest over head sets I have ever kited, super fun punchy wave with perfect side shore wind. Half way through a front roll, this is my favorite Instagram shot this year, taken by Jay Wallace at my home spot, Cook St. The wind was light, gusty and offshore but it was one of the last clear days in the forecast to get some much-needed video footage. Jay just happened to be taking some shots on the beach that day, so I threw a couple moves in front of him. We met afterwards and he showed me a couple of his shots, we exchanged emails and have been working together ever since.

Favorite video you appeared in?

Not to be biased, but it’s probably my own video “F**king Deadly”… At the end of the summer I had a bunch of clips lying around of all the moves I had been working on, so I smashed them all into a short freestyle video. 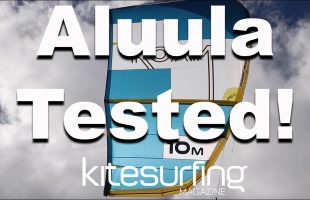