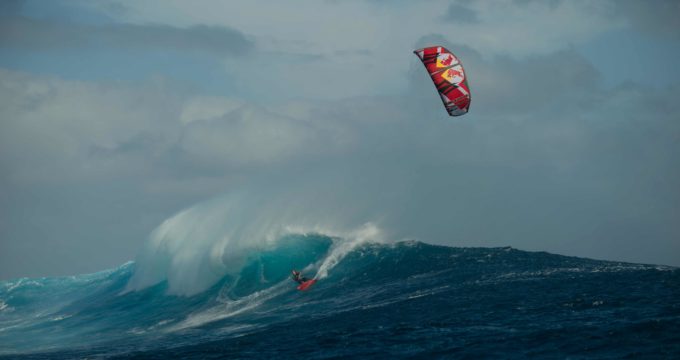 The first time I went to Fiji was almost thirty years ago, when I flew with Pete Cabrinha and the rest of the Gaastra crew to shoot the windsurfing movie Angle of Attack. At that time the “island” of Namotu was just an atoll with a few bushes and one or two coconut trees on it. We stayed on Plantation Island and took a boat out to Namotu each day to sail the barrier reef break now known as Namotu Lefts. The wind is sideshore and varies in strength from nothing to eight meter, averaging in nice 10 meter conditions. The waves are long and clean, and it’s normally warm, sunny and beautiful. I have been there many times since that first trip, for windsurfing competitions, waterman multi-sport events, family holidays, photo shoots, kitesurfing and stand up paddling. It really is a kiter’s paradise; offering nice and easy flatwater as well as waves from all angles depending on which side of the island you ride. Though I’ve kited there many times over the years, this trip was exceptional. 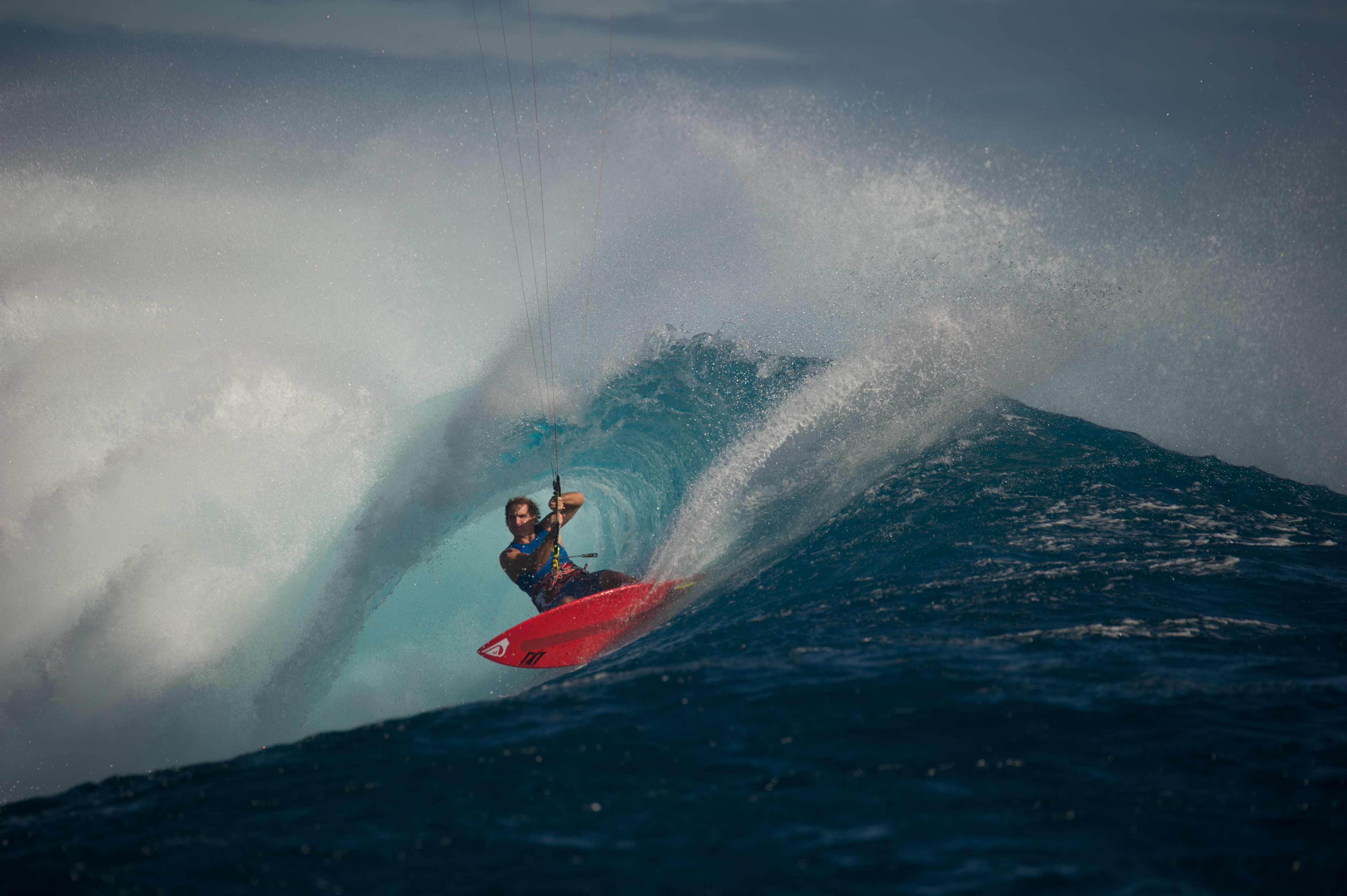 I originally planned to fly over and work with the Eyeforce guys shooting their kitesurfing documentary Chapter One. Pete Cabrinha and Keahi de Aboitiz would be over there on the Odyssey, and if and when conditions were good, Kevin Langeree and I would fly over and hook up with them. It was kind of a meeting of generations, two from Naish and two from Cabrinha looking for some awesome lefts. We had a couple week window, but unfortunately the conditions never transpired, and the window closed with Kevin having to head back on tour. As luck would have it, a solid swell appeared on the radar together right when everyone was scheduled to head back home, with a really good wind forecast; something that doesn’t happen that often down there. So the crew extended their stay in Fiji, and off I went, together with Patri McLaughlin and Jesse Richman on a last-minute trip.

Sometimes you get lucky; this was one of those times. We arrived just as the swell began to pick up, along with the trade winds. With Pete and Keahi on the boat, Jesse and Patri staying with Surf Fiji on the mainland, and Ben Wilson, Ben Meyer, myself and a host of recreational kiters staying on Namotu, it was not going to be a solo session. But it was certainly an awesome group to be riding with. Ben Wilson and I headed up to Cloudbreak to have a look. The wind was just picking up, and the surf was only three-to-four foot Hawaiian, so there were still several surfers in the lineup (it gets really crowded until the waves are big enough to clear the surfers out). The way the wave wraps around the reef at Cloudbreak, the outer peak is sideshore and has some exposure that makes it a bit bumpy at times. As the wave winds along the reef it gradually pulls to the right, making the wind more and more offshore as you ride, and making the wave cleaner and smoother the further in you ride. Ride too far, or get behind the peak, and you find yourself on dry reef with straight offshore winds. 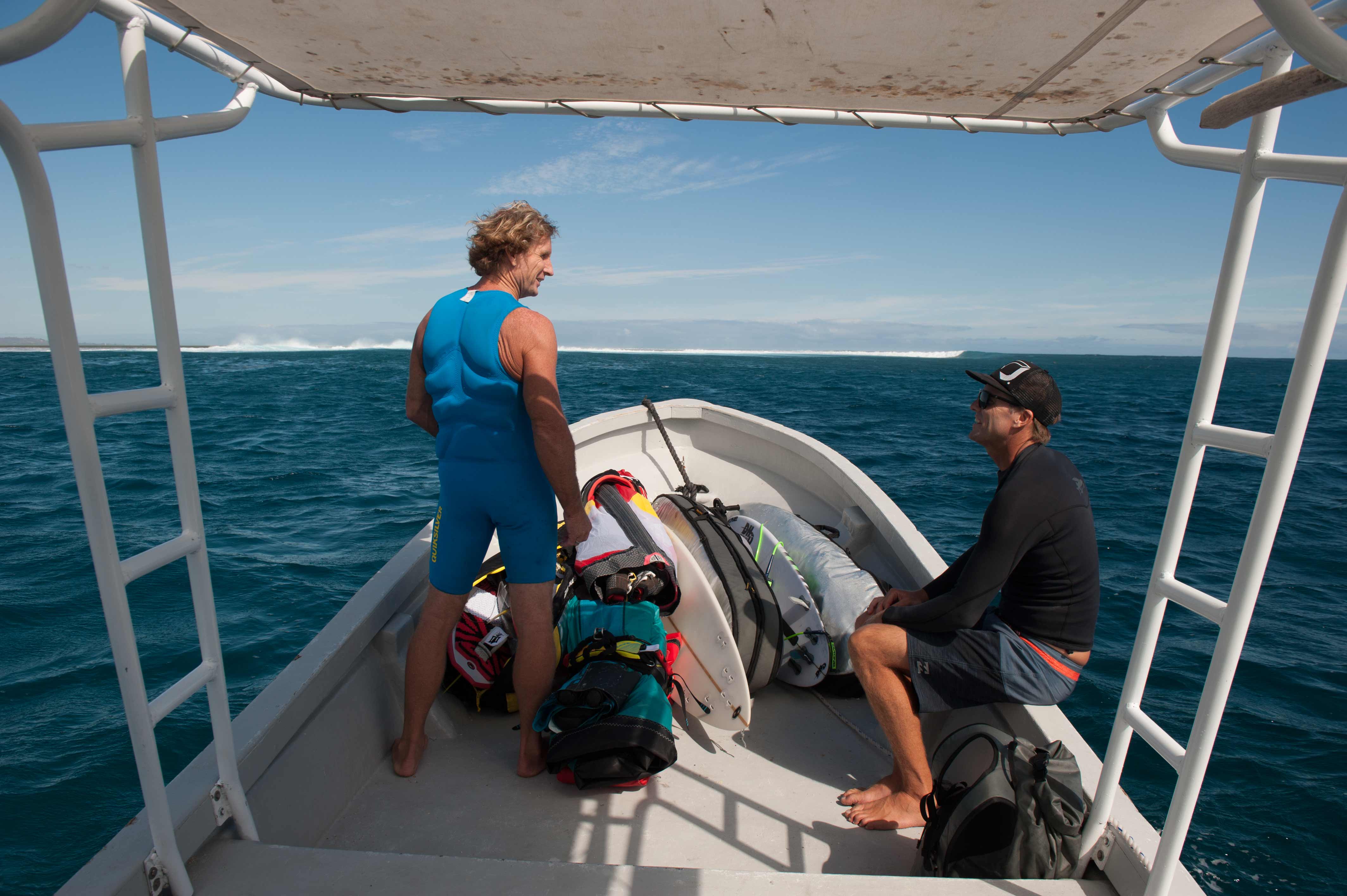 Robby Naish and Ben Wilson, two of the greatest watermen of all time , share a ride, a story and a laugh.

I can really only spend a few minutes sitting on a boat before my stomach turns inside out, so I rigged up first, whether it was windy enough or not. I had to get off the boat. It turned out to be windier than it looked, and in no time Ben, Pete, and Keahi were also out, along with some of the Namotu crew that might have ventured into conditions that were a little above their pay grade. One of them went down and lost everything: kite, control bar, board, and was lucky to swim back out through the surf rather than onto the reef. Jesse and Patri opted to surf and save their energy for the next day and bigger swell. It was a decent warm up session, but Ben and I called it a day fairly early due to the crowd. 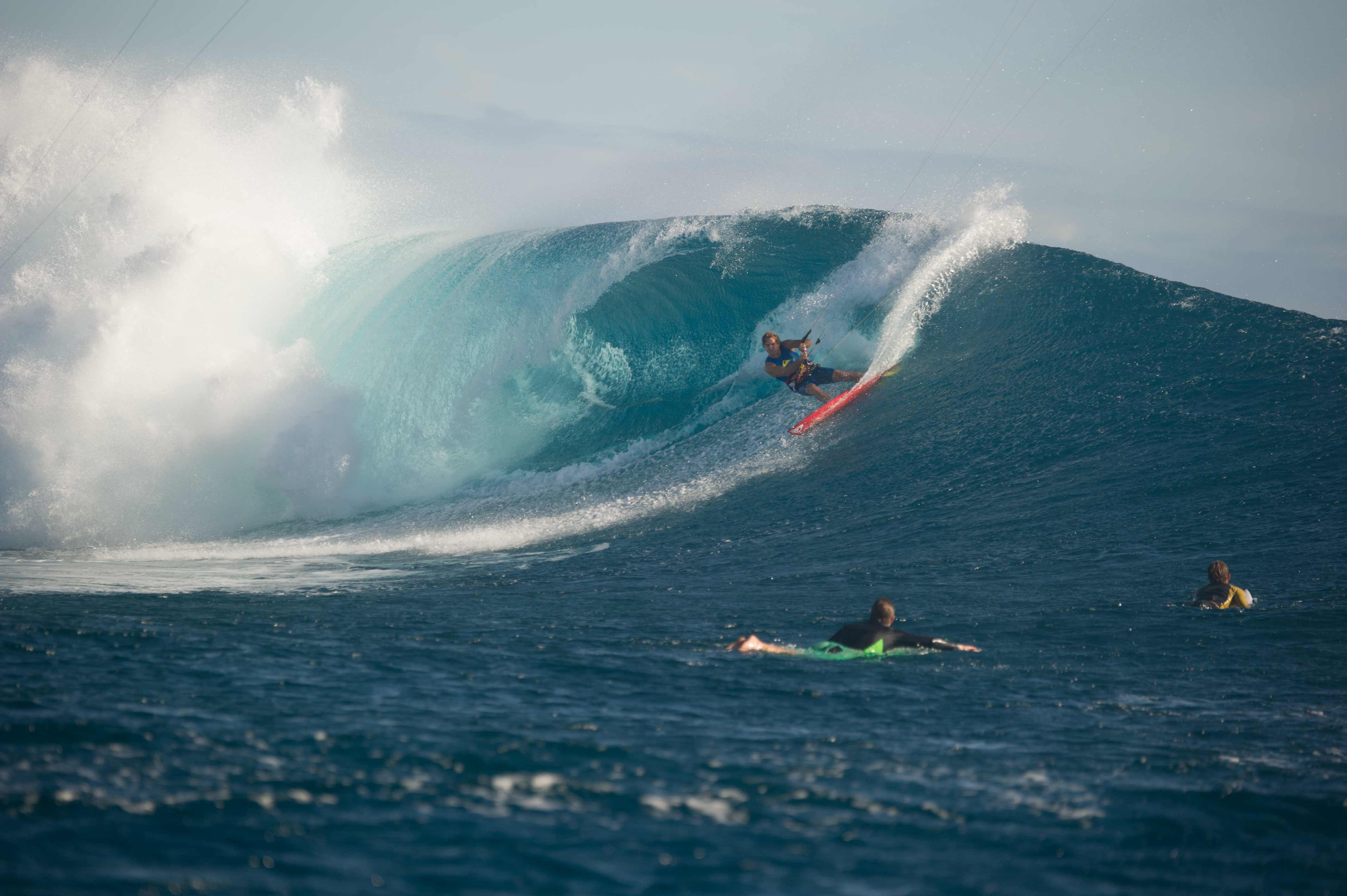 Day two was solid six-to-eight foot with bigger sets and cranking winds making an eight meter Pivot a handful at times. I windsurfed my first session and then switched to kiting for the rest of the day. The biggest difference to me between windsurfing a wave like this and kiting it is the power and speed bottom turning. On a windsurfer I can take off behind the peak and bottom turn at full speed, using the full rail of the board to drive up into the section. Kiting, especially strapless (which I was not), makes for a fairly tentative bottom turn when the waves are big. Beyond that, the kite has an accelerator in the flats to get around sections that nothing else compares to. 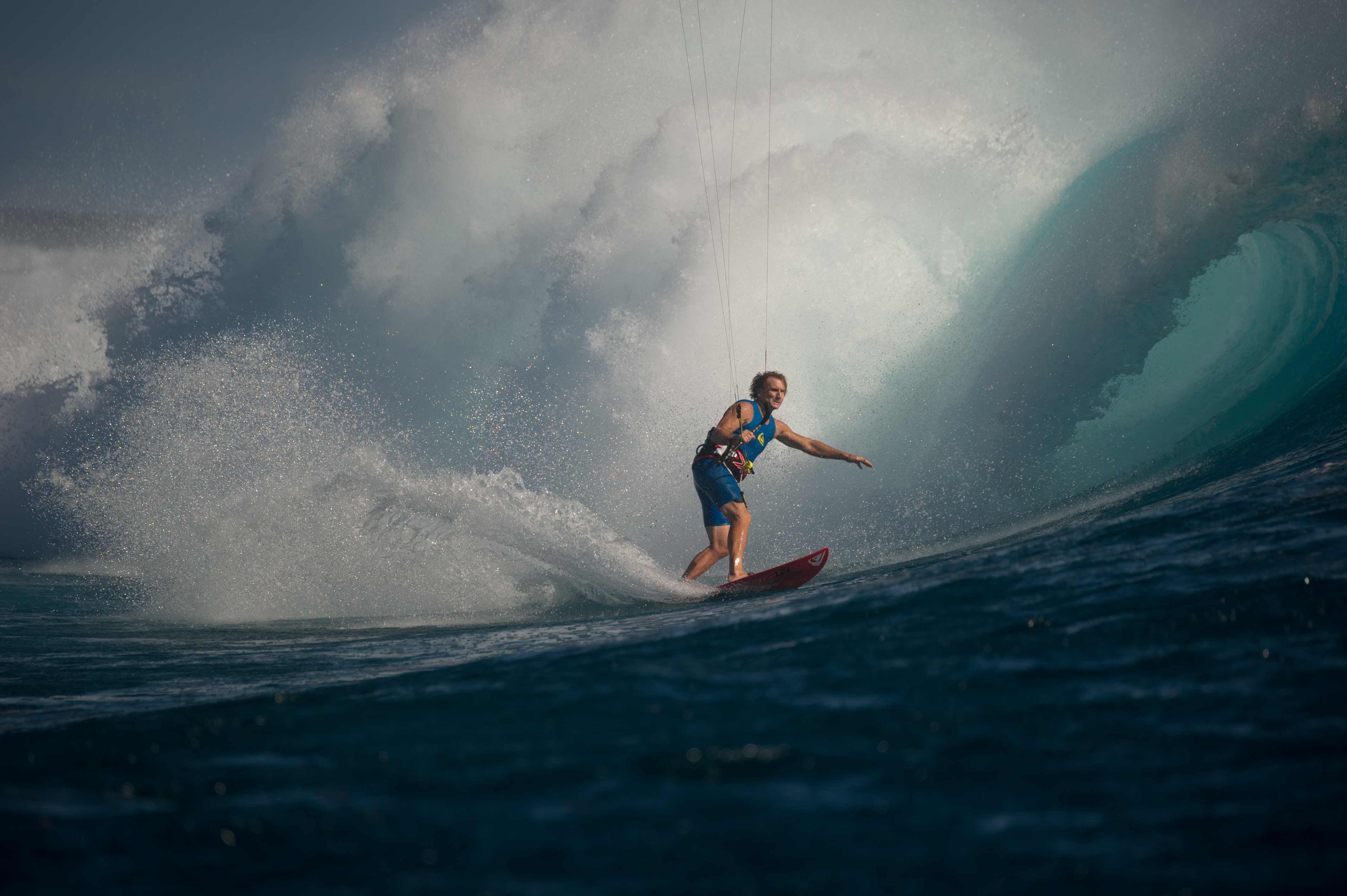 If you get shut down behind the peak on a windsurfer you’re finished. Kiting you can often get around it or just pop over the back of the wave. I sailed for a couple of hours, then got back to the boat, put away the windsurfer and rigged up an 8 meter. The crew was already out killing it. Jesse, Patri, and Keahi were all pulling in, showing that skill and no fear make a great combination. Pete was getting some good ones, as were Ben and Ben.

The bigger sets made strapless backside look pretty undesirable at times, but you could tell that everyone was having an absolute blast. I was loving life riding front-side for a change. I am still more of a top-to-bottom surfer, loving to lay down fast and hard bottom turns more than just about anything. My normal routine is to ride fast and hard and to smack the lip rather than waiting and stalling to pull in. One of the main reasons I still love to ride strapped. If your mission is to get tubed though, strapless is the ticket and this is the place. I still have a little too much respect (fear) of my lines in bigger surf, and the thought of pulling into a barrel, getting clipped in the head and rolling head first into my flying lines is enough to make me cautious in terms of positioning. By the end of the day, and especially by the next day I was more comfortable about pulling into the pocket. 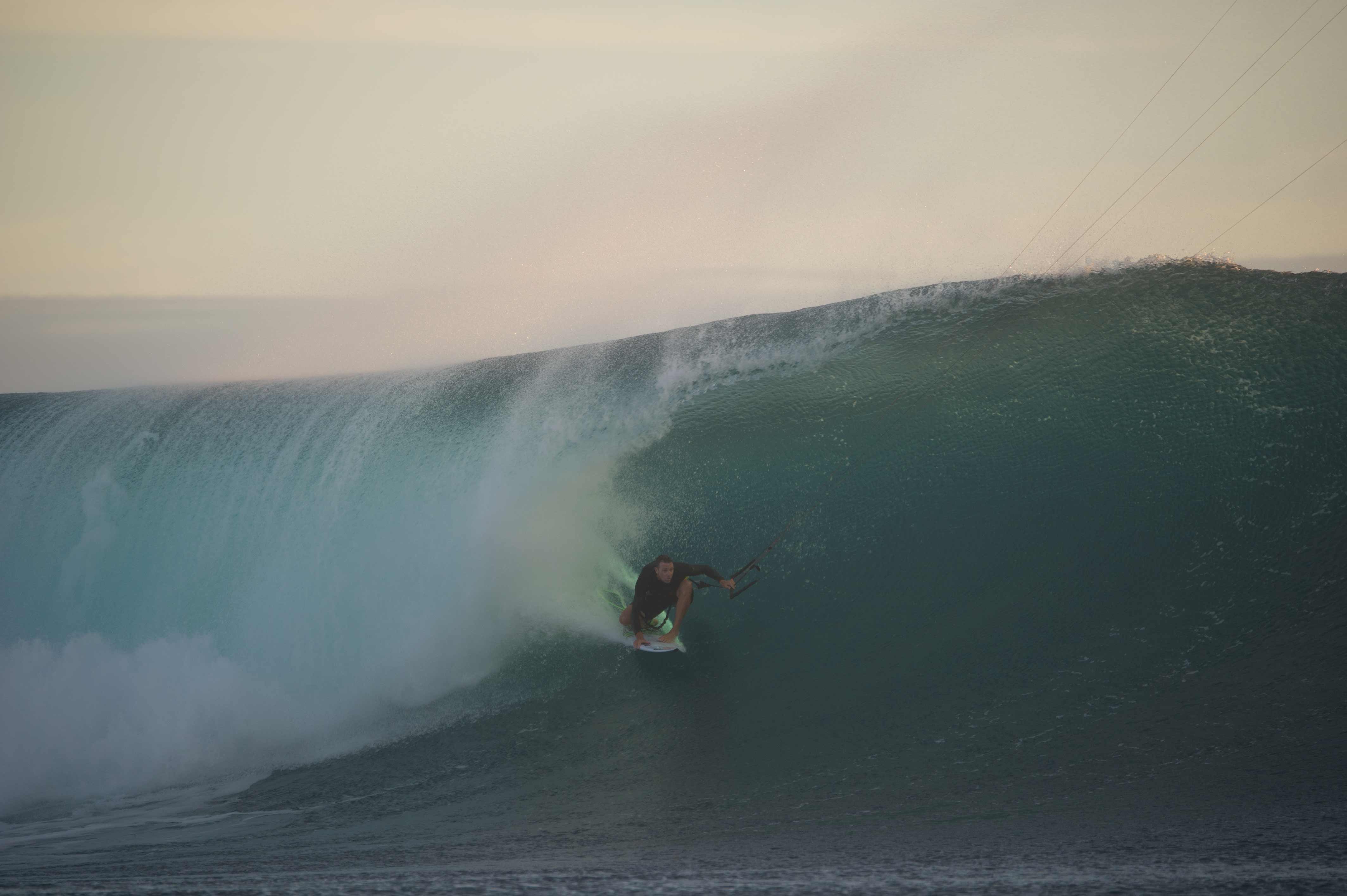 But watching Jesse and the other two young riders dive right in without hesitation and take massive beatings on occasion as a result (all losing kites in the process) was pretty rad. I watched all three of them get absolutely shacked. I for sure had the best wave kiting of my life so far, and I am pretty confident that the others would feel the same. That day and the next were solid Cloudbreak, and the third day was the best Namotu Lefts that I have ever ridden. Overhead waves, straight sideshore wind, eight meter, 5’8” Global wave board and pealing waves that were just begging to be slaughtered. Namotu Lefts does not offer the perfect barrel of Cloudbreak, but on a day like that I was getting six-to-ten massive off-the-lips, section after section. Between having the best winds ever, a good sized swell for three days, while riding friends that happen to be some of the best wave kiters on the planet made this trip one to remember.

The Eyeforce guys must have some pretty damn epic footage. Stay tuned for Chapter One. And if you have a bucket list, add a trip to Namotu Adventure Resort to it.—Aloha, Robby Naish 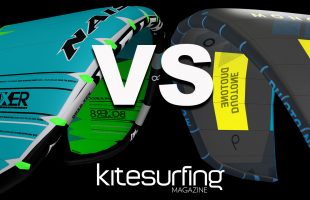 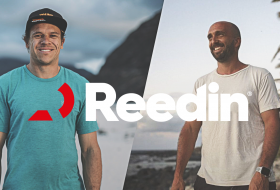 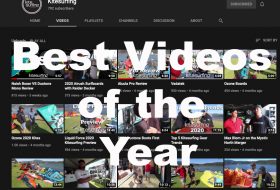 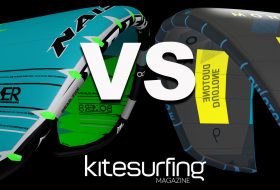 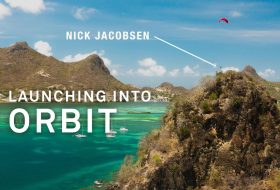 Launching into Orbit with Nick Jacobsen